I was diagnosed with Ovarian Cancer at age 63, in 2016. Everyone’s story is unique and mine is definitely one that I consider unique. If you ever look up symptoms of Ovarian Cancer, more times than not you will notice that it is very rare to feel any symptoms, at least the early stages. This was not my case. For about 3 years, prior to 2016, I had a very mild, bothersome feeling right where my left ovary was located. Truthfully, I didn’t think much of it. It wasn’t until mid-2016 that the feeling went from “bothersome” to “painful.” It was a strange sensation that I, at times, could not bare.

One night, the pain escalated and I asked my husband to take me to the emergency department. After hours of waiting, tons of blood work and an ultrasound, the ED doctor came to speak with me and my husband. She said, in a very kind and warm way: “I am not 100% sure, but my guess is that you have Ovarian Cancer.” Without any particular feeling, or perhaps it was shock, I looked straight into the doctor’s eyes and said “if this is cancer, then I need to confront the problem by doing whatever needs to be done to treat it.” My husband, Alberto, after hearing the word “cancer” bowed his head down into his hands. No tears, just holding his head with his hands. It was clear that this dug deep into his heart. But, he was never the type of man to easily shed any tears.The ED doctor referred me to a surgical oncologist, Dr. Garrett, who was to determine if her prediction was correct. During my appointment with Dr. Garrett, she explained that the only way to find out if it was cancer was to remove the tumor in the ovary and send it to pathology right away for an instant reading. Regardless, the tumor had to come out. She also explained that during the surgery, if she were to find anything else that looked concerning, she was going to remove it.

Thursday, September 22nd, 2016 – the worst day of my life and my children’s life. This was the day of my surgery and we were all a bit nervous, but I put all of my fear into God’s hands. It was not my surgery – which actually ended up being a hysterectomy – that made it the worst day. It was what I learned after my surgery. I was transferred to a room on one of the oncology floors. I was wondering where my family was and especially why my husband hadn’t called me a million times by now. They all knew I was done with my procedure. Yet, nobody was in the room waiting for me, nor were there any flowers or balloons (which was so typical of my husband and children after my surgeries). It wasn’t until hours later that I found out what happened.

My children and a priest surrounded my hospital bed. Their faces showed an emotion that I had never seen before. My husband wasn’t there, but I immediately thought that my surgeon told them that I was going to die. That was not it.The morning of my surgery, my children and I drove out of our home driveway to head to the hospital. But before that, my husband and I said goodbye to each other and he kissed me. My children convinced him to go to work that day so that he wouldn’t be worry about me while I was undergoing surgery. Little did any of us know, that the strongest and most humble man that we had ever known was so destroyed by my situation, that his heart literally and figuratively could not take it. My husband had a massive heart attack and several cardiac arrests shortly after we left that driveway. Those were the news I was greeted with after having undergone a complete hysterectomy. I no longer felt pain from my surgery. That no longer mattered. My husband of 39 years was extremely ill. I could barely even cry because my surgery didn’t allow me. My husband lasted 13 days in the ICU fighting for his life, But God needed another angel in heaven and he couldn’t have picked a better one. No wonder my husband’s middle name was “Angel.”

Thank God for my children. If it wasn’t for them, I would not have been able to get through the battle that awaited me. After it being strongly recommended by my medical care team, I underwent chemotherapy. They treated me with Carboplatin and Taxol. My children always made sure at least 1 out of the 5 of them was present with me during my chemo sessions. My hair started getting very weak, brittle, and dry. As expected, it began falling off. I decided to have my eldest son shave my head. It was very difficult to get used to. My hair was a part of my identity and something that made me feel beautiful. Not only did I feel unattractive without it, but I also felt colder than usual. I had to redefine my definition of beauty and work with my new look. My children helped me feel beautiful again and I really did. Some of the challenges I came across was when I was shopping for hats and wigs in order to keep my head warm. It was very difficult to find things that I liked and that actually fit comfortably. Which was at times frustrating. Chemotherapy was not easy. I actually couldn’t even finish all 6 sessions. I only did half. Chemo made me so sick and I even had to get admitted because of an allergic reaction I had to the Taxol.

It has now been 4 years and thank God I have been cancer-free. Although my husband was not physically present, I felt him more than ever. His memory and soul is carried among all of my children and that brings an immense joy to my heart. 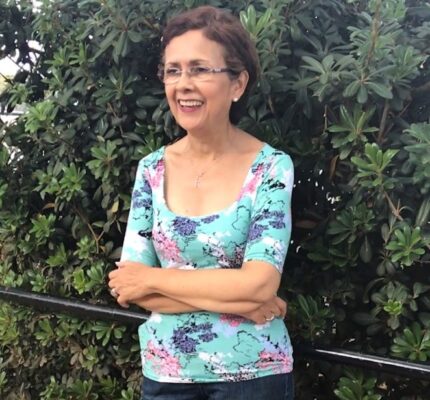 Are you sure to quit this game